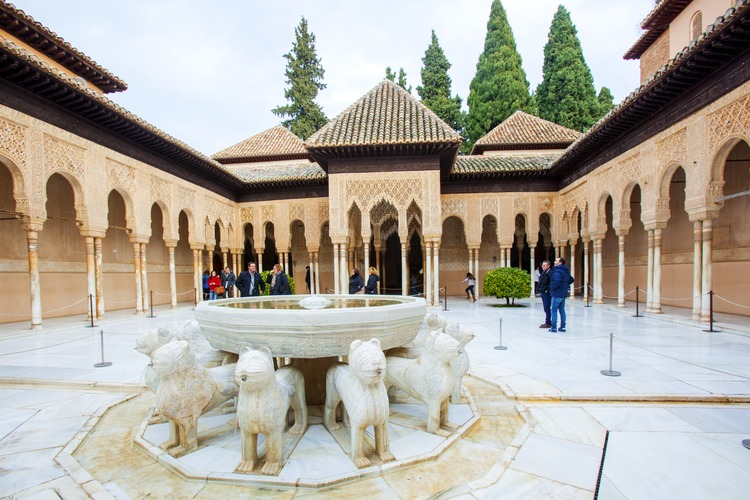 On this trip we take you to know some of the Andalusian monuments declared by Unesco, Cultural Heritage of Humanity and we will enjoy a rich Intangible Heritage certified by Unesco: flamenco, the Mediterranean diet and the festival of the patios of Córdoba (In the month of May).

Córdoba is one of the few cities in the world that has four inscriptions on the World Heritage List granted by UNESCO, after the incorporation of Medina Azahara in 2018, to the Mosque (1984), the Historic Center (1994) and the Patios of Córdoba (2012). Former Umayyad capital of al-Andalus with such a dazzling history that it has left its mark on magnificent monuments. We know Córdoba mainly for the Mosque-Cathedral, the only one with this condition in the world, but we cannot forget, the Alcázar de los Reyes Cristianos, the Roman Bridge and the Albolafia, the Torre de la Calahorra, the Jewish Quarter and of so many places and charms that is, without a doubt, one of the most beautiful and interesting Spanish cities. A city that falls in love at night and in spring, with its scent of jasmine and orange blossom, opens its patios full of flowers to the world, turning them into a party that is Intangible Heritage of Humanity.

Art and history are hidden in every corner, alley, patio, squares, etc.

Another space to discover is the Guadamecí House-Museum, the only one in the world that shows the recovery of the original Umayyad techniques on the skin for use as decoration.

During the tour we will stop for a snack.

Our experience in Córdoba will go hand in hand with a private guide.

After the tour we will be able to enjoy a Gastronomy Workshop with Cordovan products.

We will move to Medina Azahara or “Madinat al-Zahra” jewel  declared a World Heritage Site, which was the nucleus of power of the Caliphate of Córdoba. In it we will find the remains of the exuberant caliphal city that was built in the 10th century by the first Umayyad caliph, Abderraman III. In the year 929 it was proclaimed the capital of the independent caliphate of Damascus, being the religious, political and administrative seat of the entire western Islamic kingdom.

We will make a private visit to see this solemn enclosure.

Our visit to Córdoba will continue in a patio adorned with flowers where, at the hands of a Cordovan artisan, we will carry out a Silver Filigree Workshop and you will be able to create a jewel for yourself. It will be approximately 1 hour.

In Seville we will make a private visit to the three monuments declared World Heritage Sites: The Real Alcázar, the Cathedral and the Archive of the Indies.

The Real Alcázar is one of the oldest palaces in use in the world, which even today is the official residence in Seville of the Kings of Spain. Its origins date back to the 10th century, when the Caliph of Córdoba Abderrahmán III ordered the construction of a new government center in Seville on the site of an old Visigoth settlement that had previously been Roman. This spectacular palace complex was built in different historical stages, reflected in the Mudejar, Gothic, Baroque and even Renaissance styles that intermingle, giving rise to a unique architectural complex in the world.

We will visit their rooms and walk through their wonderful gardens.

After a walk through the Barrio de Santa Cruz we will enter the largest Gothic Cathedral in the world. We will contemplate inside unique works of art such as the main altarpiece and we will be able to see up close the mausoleum where the remains of Christopher Columbus rest. Attached to the Cathedral we will see one of the most famous images of Seville, the Giralda, a bell tower built on the minaret of the old Almohad mosque.

Later, we will approach the third World Heritage monument, the Archivo de Indias, where the memory of its splendid past as a gateway to trade with the Indies is kept. Inside we can see unique documents with the signature of great historical figures such as Cristóbal Colón or Hernán Cortés.

We will walk through one of the markets of the city, with their stalls, and then we will be able to make a route through the taverns with the most tradition and history in the city.

We will enjoy a private flamenco show that will show us the artistic heritage of this art included in the list of Intangible Cultural Heritage of Humanity by UNESCO.

Final destination of all the Routes of the Andalusian legacy.

In its last destination, this route will show us a city of universal renown, steeped in history and artistic treasures. Capital of the last Muslim kingdom of the Iberian Peninsula, Granada’s heritage has in the impressive complex of the Alhambra, with Sierra Nevada in the background, the memory of a Hispano-Muslim civilization lasting eight centuries, unique for its characteristics, which constitutes one of the Humanity’s most precious treasures and that together with the Generalife and the Albaicín neighborhood are part of the UNESCO World Heritage Site.

impressive complex of the Alhambra, with Sierra Nevada in the background, the memory of a Hispano-Muslim civilization lasting eight centuries, unique for its characteristics, which constitutes one of the Humanity’s most precious treasures and that together with the Generalife and the Albaicín neighborhood are part of the UNESCO World Heritage Site.

We will visit the Alhambra, the most spectacular Arab citadel in the world and symbol of Granada, (13th-14th centuries), its Nasrid Palaces, the Alcazaba, the Medina, the Palace of Carlos V and finally we will finish in the Generalife Gardens.

The origin of the city of Granada is located in the Albaicín. Built around the Alcazaba Cadima that the Ziri dynasty began to build in 1013. We will walk through its narrow streets and broken slopes where churches abound that occupy the sites of old mosques, squares, wells and typical houses of unparalleled beauty and charm. We will discover the remains of the Arab wall, its towers, as well as the different access gates to the city such as the Puerta de Elvira or the Puerta de las Pesas. We will breathe the essence of a neighborhood in which an Islamic urban fabric and remains of civil and religious architecture from the Renaissance and Baroque merge. Much of its charm resides in the many carmenes that populate the neighborhood (typical houses with orchards and gardens), in addition to its viewpoints where you can enjoy beautiful sunsets, with the Alhambra in front, and in the background, Sierra Nevada.

Arrival in the morning at the AVE station in Córdoba, and transfer to our hotel in Córdoba. Check-in hotel. Reception by the person in charge of Sonríe Travel. Pick up by the guide to make the private visit with the created itinerary including the Mosque-Cathedral. Andalusian lunch-gastronomy. Free afternoon and accommodation

Breakfast. Pick up by the transfer to transfer them to the visit in Madinat-Al-Zahra. Return to Córdoba, free lunch.

In the afternoon we will carry out a Workshop in a typical place in Córdoba, since it is located in one of the Patios adorned with flowers (from 4 to 6 pax maximum) where you will create a jewel for yourself made of filigree in silver. It will be approximately 1 hour. Free dinner

Breakfast. Pick up by private transfer for our transfer to Seville. Arrival at the hotel and check-in.

The guide will pick us up in the afternoon at the hotel for the scheduled visit. (Cathedral + Royal Alcazar + Archive of the Indies)

Breakfast. Pick up by your host to take a route to one of the food markets with history in the city and enjoy some tapas in some of the taverns with more history in Seville

Free afternoon. At night, they will pick you up to enjoy the flamenco show.

Breakfast and departure to Granada, one of the beautiful cities that bewitches those who come to know it.

Arrival at the hotel in Granada – Check-in and free lunch

In the afternoon, your guide will pick you up to get to know one of the most beautiful neighborhoods in the city, the Barrio del Albaicín. After the visit we will invite you to enjoy a wonderful sunset.

Breakfast. Pick up by the transfer and our guide to make the wonderful visit to the Alhambra and Generalife, with a specialist guide in Islamic art and culture. Once finished we will enjoy a Nasrid lunch.

Breakfast and transfer to the ffcc station or airport.

Dismissal by our manager

End of our services

● Private transfer throughout the trip

● Private guide in the visits indicated in Córdoba, Seville and Granada

● welcome by the person in charge of Sonríe Travel

The Itinerary complies with all Covi 19 measures. It may be modified according to the circumstances indicated by the authorities, always maintaining the same quality of the trip. The trip is covered by a contract of the Combined Travel Law